El Mastaba Center for Egyptian Folk Music invites you to attend a performance by El Tanbura next Thursday March 5th, 2015 at El Dammah Theater at 08:00 PM, Tickets at the counter - 30 EGP, Tickets by reservation - 20 EGP.

El Tanbura was established by Zakaria Ibrahim in 1989 in Port Said, when he brought together the masters of the simsimia, encouraging them in the revival of their musical heritage. Most of them had stopped playing: their music was no longer in demand, as people followed the fashion of pop culture music. Today, El Tanbura includes 20 members - master musicians, singers, philosophers, as well as fishermen, builders, plumbers and vendors, ranging in age from 25 to 84 years. Their instruments are their voices, the Simsimia, theTanbura (big lyre), Nay also Kawala (end-blown, reed flute), tabla (vase-shaped drum), triangle, Sagat (small cymbals), Shakhalil (kind of castanets) and Riqq (open, wooden frame drum with jingling discs in the frame). Their collected oral repertoire consists of more than 20 hours of traditional songs and much remains to be documented.
The award-winning El Tanbura has performed to enthusiastic audiences in countries all over the world from Canada to Europe, to Australia and Africa. They are regularly invited to participate in international music festivals, such as WOMAD in England, Abu Dhabiand WOMEX in Spain and, most recently, WOMAD in Russia.
In collaboration with their English partner, the production company, 30IPS, El Mastaba has produced two albums of international standard for El Tanbura band "Between the Desert and the Sea" and "Friends of Bambouti". The Center has also produced three albums in Egypt entitled "Nouh El Hamam", "Ahwa Qamar" and, most recently, an album of resistance songs spanning several decades, "January 26" 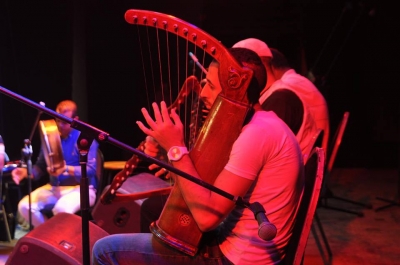