We are very pleased to invite you to an evening with cultural historian and writer Alia Mossallam, as part of the Townhouse Salons series

In September 2015, Townhouse hosted the first workshop on the art of long form writing, organized by 60pages (60pages.com) and MiCT. The workshop brought together 25 writers, journalists, translators and bloggers to talk about stories that need to be told at this moment

Alia Mossallam’s “RAWI”, published recently by 60 pages, is a long read about birth as a point of arrival, a point of departure; about defeat, the stories we wish we could have told, and those that tell themselves despite ourselves. The talk will be held in Arabic, accompanied by readings in English. Join us next Thursday, 7pm at Townhouse Rawabet

Townhouse Salon is a monthly series of informal conversations led by a writer, an artist, or a critic – who is invited to curate a topic and share relevant texts with the public

Alia Mossallam by Lina Attalah:
Alia Mosallam is a thinker, often weaving her thoughts in writings that range from letters to graduates theses, but also in different other acts of organizing, advocacy and mobilization. Her main academic inquiry has been centered on how history can be re-imagined and re-written through the ranks of the verbal, the sung and more broadly, the popular, the vernacular. She conceptualized and led workshops with young writers and historians on unearthing untold histories in Alexandria, Nubia and Port Said. She brought all these processes, of thinking and producing, to classrooms, both in formal institutions she taught at like the American University in Cairo and alternative ones like the Cairo Institute for Liberal Arts. She was a curriculum developer for an annual creative Arab youth camp organized by the Arab Digital Expression Foundation and was a child protection officer with UNICEF. She is a wife and mother of two: Taya (the rock?) and Rawi (the storyteller). To her family, she brings all of the above, and through motherhood, she is learning new things about presence, resistance and telling stories about them. Read the full bio here
http://www.60pages.com/people/alia-mossallam/ 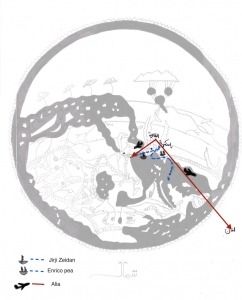