Stability of biological and physiological surroundings is a necessity for human health. Often treated as a separate challenge, climate change has been proven by scientists and doctors to be strongly connected to water, food and air which – if not safe and sufficient – can cause several ailments, some of which are fatal.

According to the World Health Organization (WHO), the worldwide number of deaths caused by climate change is rapidly increasing, whether indirectly through diseases like malaria, diarrhea, malnutrition and respiratory diseases, or directly through extreme weather conditions like droughts, heat waves and floods. Children and elderly people are among the most affected which calls for a strong global stance to protect them, as well as us.

In Egypt, with its almost 100 million citizens, threats posed by extreme weather conditions are already a reality. In 2015, the Egyptian Ministry of Health registered more than 100 deaths due to extreme summer heat waves. In that same year, news reported that 11 citizens had lost their lives in the abnormal winter floods in Affouna village in Wadi El Natroun, Abou Homos and El-Rahamania. With a majority of its population living near water surfaces, Egypt is also very sensitive to climate-induced sea level rise. According to the World Bank, Alexandria is among the top-ranking cities facing the risk of increased floods in a global comparison.

The WHO’s Climate and Health Country Profile on Egypt gives a rather pessimistic prognosis when it comes to indirect climate change impacts on Egyptians health: If the world continues with business as usual, around 1000 children are predicted to die annually from diarrheaby 2050. Between 2070 and 2100, floods are expected to affect 2.4 million Egyptian citizens. Egypt’s Climate and Health Country Profile proposes adaptive measures, including investment in climate resilient and health infrastructure. In addition, it recommends establishing an Integrated Surveillance and Response System, encompassing all available climatic information, with early warning and response systems for climate sensitive health risks.

The 49th Cairo Climate Talks will bring together scientists, doctors, policy makers and civil society actors to discuss how climate change mitigation and adaptation strategies could become more holistic with regards to public health and how collaboration between meteorological and health services as well as the government could be further enhanced in order to clip down the impacts of climate change and offset its dangers for our health. 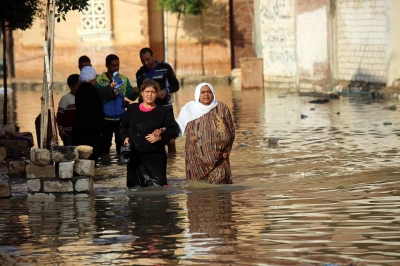